We have tried to capture the intensity and camaraderie of our annual
hometown St. Patrick Day shows on our next album release “LIVE ON LANSDOWNE,
BOSTON MA”. The album will be released on March 16, 2010 via our own label
Born & Bred Records. “LIVE ON LANSDOWNE” is the second in our live album
series & features what we think are some of your favorite songs on CD, DVD &
vinyl.

We will have more updates on the album progress and exciting news about how
to pre-order the album for you next week. Dropkick Murphys have quietly announced their next studio album, Going Out in Style. The long-running Boston punks are releasing the album - their seventh - on March 1, 2011. The 13-song album will be released while the band is on the road with Against Me! and it is their first since The Meanest of Times. 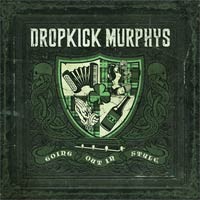